My presentation in Athens – video

So, here is my talk in Athens. Now, that I watched it, I agree with Boris that an introduction was kind of too slow. On the other hand, I’ve established good contact with an audience, which was important, and not so easy with the conferences of this kind.  As you can see (and hear:)), there were lots of questions, which is also very important, and shows the genuine interest.

Overall, I am very happy with my presentation, as I’ve said, it’s the first one of that rank that I’ve attended talked at, and it was definitely a highlight of the Industrial track.

Several talks on this conference, including one of the keynotes, were dedicated to the privacy on the web. A significant part of the keynote talk by Serge Abiteboul “Knowledge out there on the Web” was dedicated to the increasing demand for privacy. he argued that the the users do not want to store their personal data at one one system only (like Google+ or other), and that they are not going to stop being concerned about privacy.

This led to the discussion about PIM (personal information management systems), “personal” clouds and a “different direction of search”. The latter means, that a person does not want to share his PIM with companies, but (s)he want to know, “what he is interested in”, so (s)he wants to search.

And my problem is… that I d not understand, what’s the problem! First, as “a person”, I do not mind at all to have “everything in one place”, actually, it makes me really upset, when I can’t. Second, as somebody being in industries for a while, I do not see what’s the difference between “they” searching “me” as a perspective consumer, or “me” searching “them” for the same reason. Because the companies need to attract my search anyway, and they will use the same or similar technique which they use now, like “search engine optimization”, and the moment you hit their site by your search and/or the moment you purchase something from them… they know something about you. And they can exchange data…

And to be honest, I do not care whether they know I travel to Finland or like the Easy Spirit shoes:). I love to receive special offers :))

So, today is the third day of ICDT/EDBT Joint Conference in Athens. 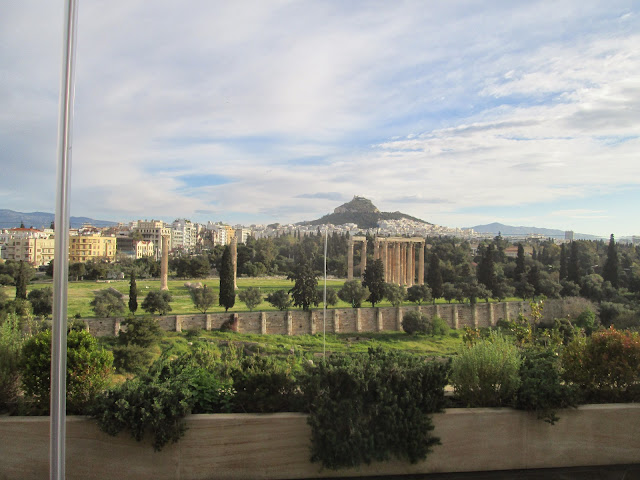 I was hoping to blog from the very first day of the conference. But all departure disasters (severe flights delays) plus trying to see at least something from the most important attractions, with the conference schedule being as packed as it is… long story short I didn’t get to blogging until now, when I’ve already presented my talk.

My presentation was the first one of the Industrial track, and granted I has nervous. One of my biggest disappointments was scheduling: the tutorial by C. Mohan from IBM, the super-famous researcher, who’s work inspired my PhD dissertation many years ago, was scheduled… exactly at the same time! So I could not even invite people to my talk, because even for myself, if it would be my choice, I would choose Mohan :).

So I was pleasantly surprised to see half of the room filled for my presentation, and I was even happier to see, that some people came just for my talk, and left to listed to the rest of Mohan after that.

My husband made a recording of my talk, but as the internet in the hotel is marginal, I probably won’t be able to publish it till I will get back to Chicago.

Overall my talk was received really well. The biggest challenge for me was to make it 25 minutes instead of 80 minutes :). There wer enough questions, so the session chair didn’t need to add his own :). (And, BTW he was listening to me with great interest).

For now, as there is no video, here are my presentation slides:

And here is our published paper:

Talking to the database…

And there is more to come!

An ACM blog post on working and parenting – love it!

From The Working Mother Myth: Merging Parenting and Programming, which I received as a part of ACM Council on Women in Computing newsletter:

Can you name one woman leader in computer science who has talked about how hard being a parent is, or about their regrets about how they handled their maternity leave or their children’s early years.

Why the radio silence? Maybe traditionally successful women don’t find parenting difficult? Or maybe the ones who find it difficult drop out of the working world and aren’t around to be role models. My gut feeling is that most women worry that talking about these difficulties could impact their careers negatively, and so put on a brave face and a chipper persona instead.

I get it. Women work hard to reach positions of power. We want the story that is told about us to focus on our professional strengths, and not on our home life struggles. Besides, nobody wants to be a downer or scare expectant parents with ugly scenarios. But I can’t help but feel that as long as we sweep the real difficulties of being a working parent under the rug, we’ll never fix the workplace to make it a more suitable environment for new moms. And as long as we let startups build “culture” on the cornerstones of beer and foosball, we are squandering the opportunity to improve conditions for all those bright young girls we’re working so hard to entice into tech.

The norm seems to be for women to keep mum about mothering. But I am not standing on the edge of a glass cliff, and have no fear of falling. Let’s get this conversation started.

last week on Friday we had a first meeting of WNG – Women Networking Group at Enova. The talks have being going on for quite a while, and when I was first approached regarding “what I think should be discussed”, I immediately told: Sheryl Sandberg’s book!

Then nothing happened for a while, or, actually the organizational committee was doing something but I was not involved. And when the first meeting was announced, the topic was listed a “Discussion of Chapter 3 of “Lean In”. Which was great.

So we all gathered in the conference room during our lunch hour, and there were sixty or seventy of us – not a small group! I was pleasantly surprised of how diverse we are – in all possible ways. First the general announcements were made and the organizational committee was introduced. Then we talked a little bit about what we are doing to do in the future (invited speakers, group discussions, group activities) and we grabbed our lunches and gathered in small groups for discussions.

The chapter 3 of Sandberg’s book talks about Heidy/Howard stereotypes (the same traits are considered “likable” in men and “not likable” in women), and we talked about our personal experiences. Some members of our group were initially shy, and later, when they started to talk, they stated, that it was deeply in their culture “to be modest”, not to praise themselves, “to give”, rather than ask…

At some point during this discussion our facilitator asked us, whether we think Enova culture supports women leadership. I said, that I believe, we have all potential for this: flexible hours, remote work, having this attitude that the inly thing, which matters is that job should be done. I also think, that most of our coworkers have no “anti-women” stereotypes and prejudgements. However, I believe we are not doing enough to encourage women to be more active – this being said, if they already are, nobody will stop them. However, for many of our female coworkers “being quite” is a cultural thing, or, even if they are not “quite”, they do not to strive for the leadership positions, because they just do not feel, they can… and with our culture this can be definitely changed!

So, now, two weeks after I am finally posting about my presentation in Moscow. First I wanted to wait till the recording of my talk will be available. Now, when I have it, I am not sure whether I really want to distribute it…

Let me begin from the beginning:). First, this presentation took place in a way bigger auditorium than the one in Saint Petersburg. The number of people attending was not as big, as usual, which made it look like in general there are less people listening. My husband warned be beforehand that I won’t be able to address the first two rows the same way I did in the U of SPb, and that was, indeed the case. Also, there were no students at ll, which makes me less exited in any case… And one more thing – I’ve invited a person whom I knew from PG Conf to come, and he said, he will, and when I didn’t see him, and saw just a couple of people I knew I’ve started panicing, that I won’t be able to establish a good contact with audience. And I’ve being in panic for the first 20 minutes, till people started to react.

Turned out, that this person who promised to come and invite his friends, did invite them, although he didn’t make it himself, so after a while I’ve located them, and they started to react and life became better:)

I any case, I think I am going to ask a person, who did a recording, to share the source with me, so that I can make a smaller presentation out of it, removing Russian in the beginning and at the end, some pauses and some of my mumbling 🙂

For those of my friends and co-workers, who want to see the “unabridged” presentation – please email me! 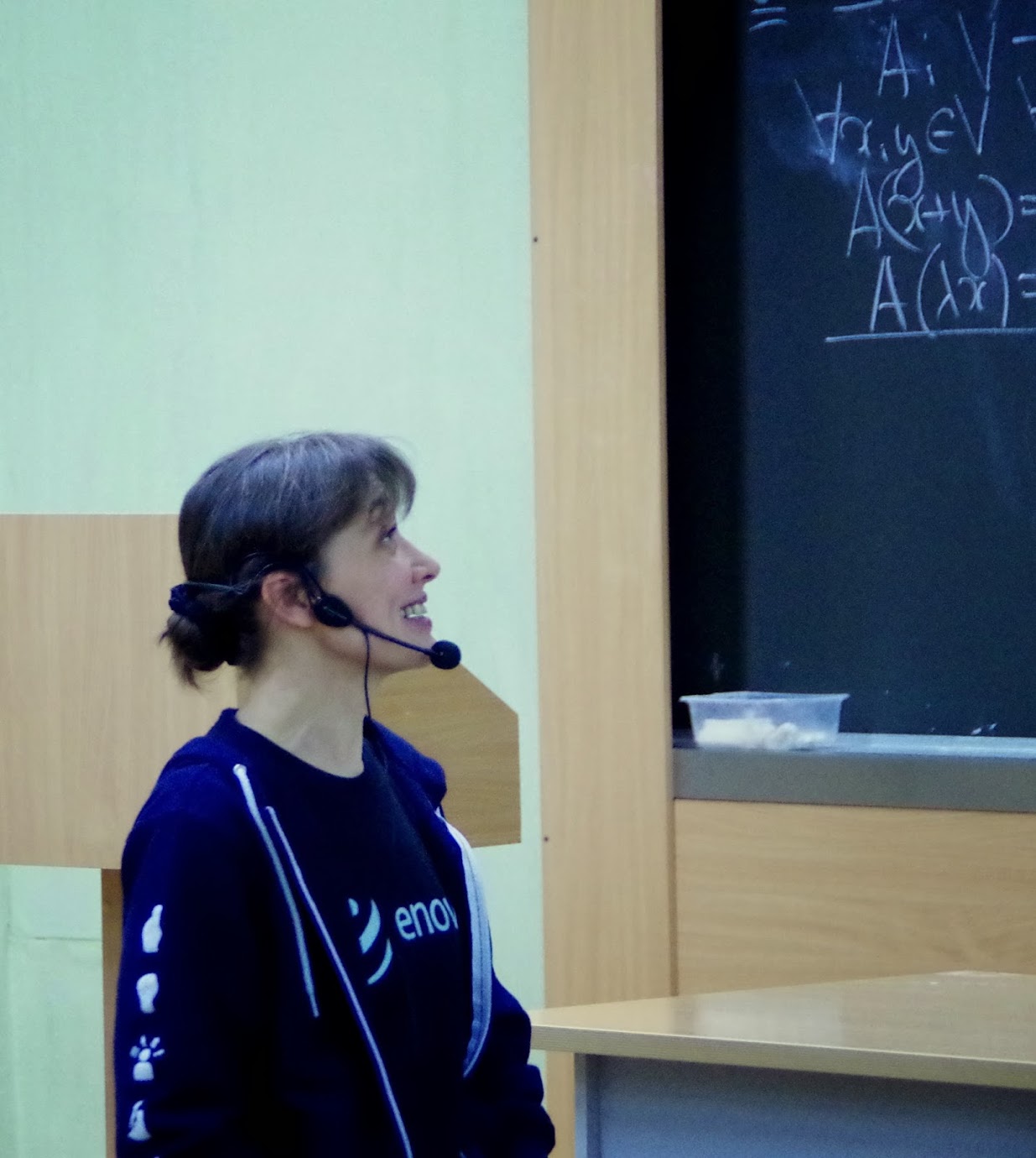 I am back – my presentation in the University of Saint Petersburg

I was hoping to post a lot during my week in Moscow and Saint Petersburg, but my time was so packed – I didn’t have a spare minute, so now I am posting about everything what happened last week.

On Feb 26 I was presenting in the University of Saint Petersburg, on the joint seminar of SE Department and Analytical and Information Systems Department (where my husband is a chair). It was great to be in my Alma Mater, to walk familiar paths… To see people whom I didn’t see for a while. 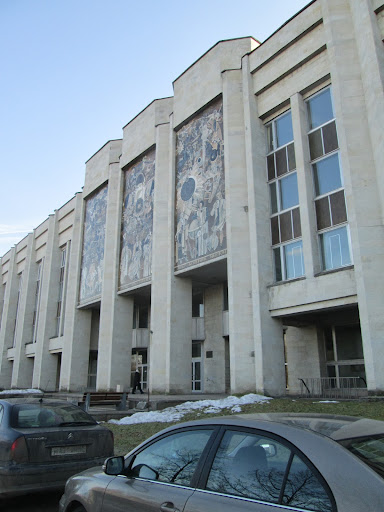