The ICDE 2016 website is up and running! Check it out here:

For the longest time, when I saw some famous people at the conferences, I never dared to approach them and introduce myself. If there was somebody, who could introduce me, I would beg this person to do so, otherwise I would observe the object of my interest from the distance.

Last year at EDBT and ICDE I’ve started to change this behavior. I’ve realized, that it is perfectly fine to approach people I want to meet without any introduction – that’s what the conferences are for! At this conference there were two people whom I wanted to meet for at least 25 years (OK, may be less than that, because for a while I didn’t even think it could be possible) – David Lomet and Hector Garcia-Molina. Way before internet, sometimes I would have to go to Moscow, where prof. Kalinichenko had the xerox copied of their articles. These were “the classics”, something “everybody who think they know something about databases should know”. I saw Lomet from the distance at a couple of conferences, but shied away from approaching him.

This time, in addition to this admiration of the classics, I really liked Lomet’s presentation at the Big Data panel, thereby I had an excuse to approach him during the TCDE reception and introduce myself as “I was learning about databases from your papers, and I also love what you said at the panel today!” He told me, that if this is the case, I should convince my company to switch from Postgres to the MS SQL Server, which I do not think is going to happen 🙂

As for Hector Garcia-Molina – I saw him for the first time “in flesh”, and was absolutely taken away by the manner he is presenting. I asked him some questions after his keynote in hopes this will give me an excuse to introduce myself afterwards, but each time I saw him during the coffee breaks, he was surrounded by people.

At the banquet I kinds figured out that is my last opportunity. So I’ve chosen a rare moment there was nobody around and approached him. Most likely he won’t remember me next time I see him, but I am still happy I did it.

Another person whom I met was Waqar Hasan – a Senior Vice President of Data at Visa. I really liked what he was talking about at the panel, so once again, I just approached him and introduced myself, and asked about his opinion on the fraud detection. He asked me questions about Enova, how old is the company, and how long I am with it, and he said that he thinks it’s a really good idea for a young company to send people to the conferences like this, it’s a very good way to present the company to the world.

Also, there were many other researches, with whom I talked during the conference, and many interesting talks I’ve attended, and I hope that by the end of the week I will cover all of them.

One of the ICDE presentations I really liked

There were several presentations at this conference, which I really liked, and the first one was the Smooth Scan: Statistics-oblivious Access Paths by Renata Borovica-Gajic and other folks from Lausanne.

The link above is for the poster, and for those of you who know what I am doing at work, it will be quite obvious, why I liked it so much!

The authors worked with Postgres (which was also very appealing to me) and what they did – they developed a new access method, which is a mix between the index scan and the table scan. This method does not take into account any table statistics at all, it just analyzes the execution “so far”, and if it turns out, for example, that the index scan appears to be slow (i.e., “too many records” are being retrieves, and each of them requires two disk accesses), the smooth scan will switch to one of the reading strategies, which are “morphing” to the full table scan. The least aggressive will just analyze all the records from the page, which was just read into the main memory, the more aggressive will read one adjacent page from the heap, and then increase the number of pages it would read. There are several different ways to drive the policy switch, and the paper describes different policies, and also provides statistics on the real data (and real queries:)) how the smooth scan approach helps to stabilize performance.

One of the questions, which is not covered in the paper, and which several people, including me, asked, was the following: with the different stats it may happen that not the access path for the particular table has to be changed, but the order of join has to be changed. That is, if this specific selection criteria from this specific table becomes less selective, may be we should not change the access to the semi-table scan but rather choose another table to start from, which will have more selective criteria.

I hope that the authors will continue to work in this direction, because this whole research looks very promising, and I am very happy that it received the best paper award!

About the poster sessions at the ICDE

At most of the them “a poster” basically means, that the paper was not good enough to be presented and/or published, but the Program committee still decided to give the authors a chance to show their work, because there was still something good in it… So, very often for the conference participants attending a poster session is a kind of charity. At the best the people with poster submission have a chance to present a demo at one of the demo sessions.

This is not the case at ICDE, and I like a lot their way of doing it. At ICDE almost all of the submitted papers have their “poster versions”. This year almost all papers, which were presented on Tuesday, had their poster versions presented on Monday during the welcome reception. I do not remember for sure, whether it was indeed so strict, because I didn’t pay attention first, but I I definitely checked out most of the Wednesday presentations on Tuesday during lunch (because it was dubbing as a poster session as well), and I know that on Wednesday only the Thursday presentations where available.

I think this is really great for both the authors and the other participants as well. In the situation, when there are six or more sessions going on at the same time, it is very difficult to make a choice which session to attend, and the short abstracts are not always helpful. But when you have the authors standing by their posters, you can ask for a private presentation just for yourself, you can ask any stupid questions you want, you can really understand, what it is about. You can decide, whether to attend this session or not, also, if you really have a conflict and want to go to some other session, you still didn’t miss this presentation completely. And this also gives the preventers an opportunity to practice their talks, so get a feeling, whether their presentations will be well understood, whether something get to be changed.

If you check out the ICDE 2015 program, you will see the green “poster” buttons by almost all of the papers – this means, that you can view the poster online. I know for sure, that there were more posters, just not all of them got submitted.

As for me, I’ve learned about the most interesting presentations from the poster session, and in the next couple of days I will try to write more about the ones I especially liked.

Actually, this all was Day 2 of the conference (Tuesday), because Day 1 was a workshop day. I was technically registered for a conference only; it won’t stop me from attending the workshops, but I’ve only arrived at about noon of Monday. So the only thing I’ve attended that day was a tutorial “Blind Men and an Elephant: Coalescing Open-source, Academic, and Industrial Perspectives on BigData”. The abstract can be found here, I have to admit, it was not that exciting, as it sounded, but that’s probably because by that time I was twice jet-lagged..

And my earlier post was about Tuesday – the first day of the conference. After the opening there was the first keynote, called “Data Crowdsourcing: Is it for Real?” presented by Hector Garcia-Molina. Let me tell you, that he is one of the “textbook characters” for me, and when you see in person somebody, who’s books and papers you’ve studied since you were a PhD student, you definitely want to hake this person’s hand and tell them how you never thought this is going to happen… and I did, but two days later :).

END_OF_DOCUMENT_TOKEN_TO_BE_REPLACED

It’s almost midnight in Seoul – I mean, it’s almost Thursday, and it’s already 3 days that I am in Korea – for the first time in my life. 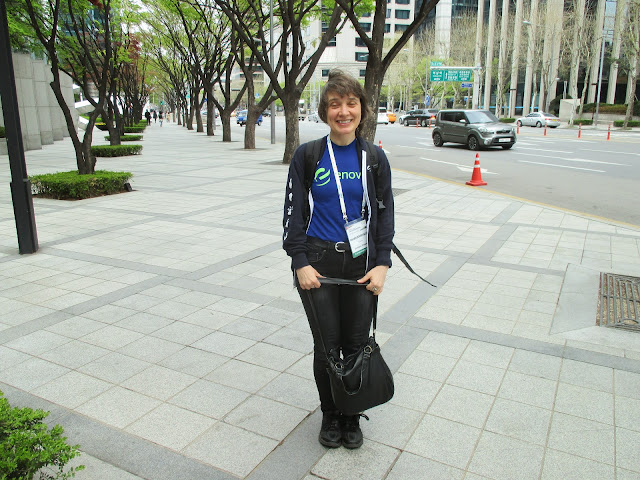